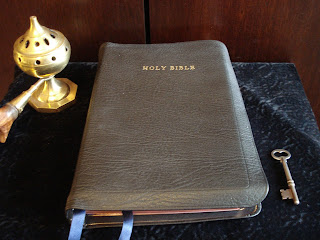 Stay calm, dear readers.  Before many of you go fleeing into the shadows like exorcised demons at the sight of a Bible on this blog, I'd like to include a quick reminder about the book's very long history in the Western Esoteric Tradition.  Its ubiquity, and questionable interpretations, should not overshadow its importance, for it is without question one of the most influential books in all of Western magic and a keystone of the Western Esoteric Tradition.  It is the talismanic book par excellence.  The Book of Psalms in particular is an ancient magical formulary, as David Rankin expertly points out his his book The Book of Gold - the Magic and Spells of the Book of Psalms.  I also urge my readers to check out David Chaim Smith's book, The Kabbalistic Mirror of Genesis: Commentary on Geneis 1-3 for a deeper exploration of Kabbalistic meaning in the Book of Genesis.

All magical traditions in Europe (and many beyond) were in some way impacted by Christianity, even the Sami shamans of the remote boreal forests of northern Scandinavia did not escape the influence (and tyranny) of Christianity.  This fact cannot be avoided, regardless of ones distaste for Christianity's theology and its followers.  Many of its tenets, beliefs, and symbolism are written into the very DNA of the Western Esoteric Tradition.

It should also be noted that for the last thousand years the vast majority of European magicians, sorcerers, conjurers and cunning folk where Christian.  The same holds true in America.  Alchemists,  root-workers, pow-wows, and mystics have been overwhelmingly Christian since the days of the Puritans.  In Grimoires - A History of Magic Books, author Owen Davies writes, "American treasure seekers seem to have relied mostly on the Bible and the psalms rather than magical conjurations,...".   Regarding the Bible, Davies also states:


Some books were also used as protective talismans.  The most obvious example is the Bible, which people placed under their pillow to protect them from witches and evil spirits, or touched when swearing oaths.  It was also used in popular divination. By placing a key at certain passages in the Bible, binding and then suspending it, the divine power enshrined in the 'good book' would make it turn in response to the name of a thief.  The Bible was obviously not a grimoire, but the power of the words, stories, psalms, and prayers it contained, as well as its holiness as an object, made it the most widely used magical resource across the social and cultural spectrum over the past thousand years. ... in the Christian world, the Bible has always been thought a necessary companion of the grimoire, and both were required to make magic.


It is for these reasons that I feel the Bible is an essential book in any esoteric library.

The book also happens to feature one of my favorite protagonists in a prominent role. 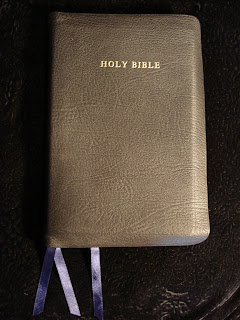 Unlike most of my reviews, I will not be commenting on the written content of the Bible.  That shouldn't be difficult to find elsewhere.  Instead I intend to help my readers navigate through the ocean of Bibles available on the market and choose a quality edition that is right for them.  I do not approach this from a belief standpoint, but rather one of functionality.

There are countless Bibles on the market, so deciding on which one is right for you can be a daunting task. The options are virtually endless.  However, there were a few traits and features I was looking for which aided me in narrowing down my choices.  These are as follows: 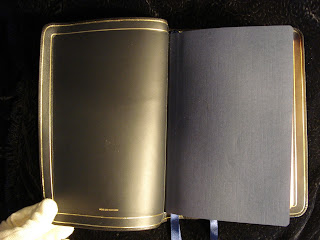 After a considerable amount of research I decided the Bible best suited to my needs was the Allan Oxford Longprimer Ref Ed. (KJV).  It met all of the criteria above.  But don't just take my word for it: It is also a favorite among many Bible enthusiasts.  One of my favorite reviews comes from this gentleman below.  Book lovers come in all varieties.  I admire his obsessive enthusiasm -- it's almost infectious.  One wasn't enough; he had to get all three colors and a stack of variations:


Like the gentleman in the video review above, it is not uncommon for people to own multiple copies/editions of the Bible.  In some cases it can prove useful to have a copy printed in a language one is unfamiliar with, such as the Latin Vulgate Bible (if one doesn't know Latin).  Finding one is easy, as the Bible is the most widely translated book in the world.  Why own a copy one can't understand?  The reason for this is simple: when one reads passages in an unfamiliar language it amounts to a "barbarous tongue" to one's ear and bypasses normal logic circuits of the brain.  Meaning is experienced abstractly through auditory channels, much like listening to instrumental music, rather than via normal verbal cognition.  Passages are felt rather than understood, at least on a rational level.  Speaking in alien tongues is also an effective tool for putting the reader into a totally different 'head-space' outside the norm.  For example, I have bi-lingual Bible printed in Pennsylvania Dutch, an obscure dialect of German, for just this purpose.  I am totally unfamiliar with this dialect, yet when I read passages I feel as if I am invoking a distinct magical aesthetic that is highly appropriate for some workings. 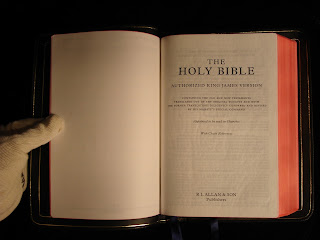 The R L Allan Longprimer is bound in full Highland goatskin with a limp binding.  This is a traditional style for Bibles, making them very flexible, easy to carry, and use.  The limp binding is extremely pliant and soft.  One can even roll the book up and bend it into all sorts of configurations without harming the binding.  This is a practice Bible aficionados amusingly call "Bible yoga".

The Highland goatskin has a luxurious, heavily gained texture, and has a full 1/2 inch overlapping yapp.  The yapp is the part of the book's cover that extends beyond the text block on top, bottom, and side.  With a limp binding the yapp can bend around on the sides of the text block to help protect it.  The title is gilt stamped on the cover and spine.  The spine also includes five bands. 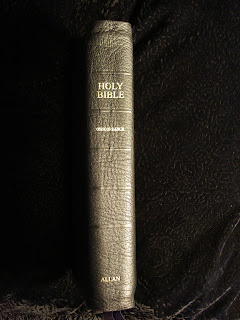 The inside covers are accented with two gilt lines.  Cover page and end page are navy blue with a linen texture and are reinforced with leather to add strength to the binding.  Other indications of quality are readily apparent.  The publisher states,


This Bible has the distinctive 'overcasting' feature which used to be standard on quality binding. Basically you will find a extra line of stitching about 1/8 of an inch from the middle stitch, usually in Genesis and Revelation. This feature adds to durability and a feature of old school craftsmanship. 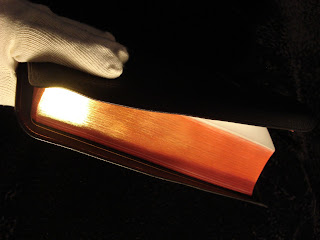 Head and tail bands are white.  Page edges are colored red and gold gilt.  This creates a lavish effect, as the page edges change color depending on how they are held to the light.  Three royal blue silk bookmarks are included to mark multiple passages.  I find this extremely handy. 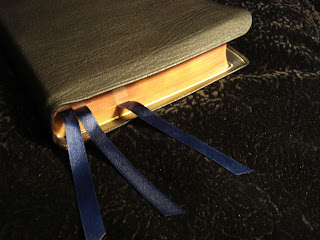 As with most Bibles, the pages are thinner than most books, hence the paper phrase "Bible thin".  This is a necessity due to the page-length of Bibles.  However, the R L Allan Longprimer has far better pages than most.  They are solid without feeling like "onion skin" and have minimal ghosting.  Text is clear and sharp in 10 point bold, divided into dual columns, and includes center column references. 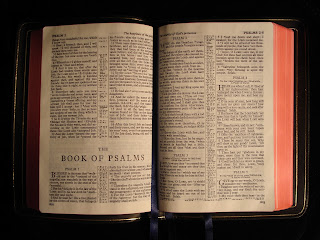 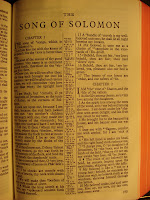 The book includes presentation pages for family history such as births, marriages, and deaths.  This is a common inclusion in Bibles, as many become family heirlooms.  The book concludes with a full concordance, full color maps, and over thirty lined pages for personal notes. 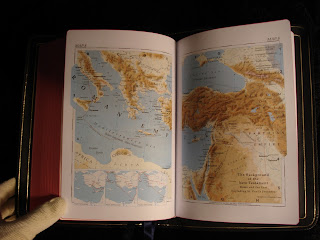 Overall the R L Allan Longprimer Bible is an impressive and handsome book.  Its solid construction and practical design make it a great choice for both Christians AND magicians.  When open it will lay completely flat, freeing one's hands for other ritual tools.  It is an essential companion to most traditional grimoires and a primary talismanic tool in many charming traditions. 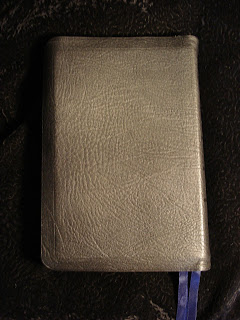 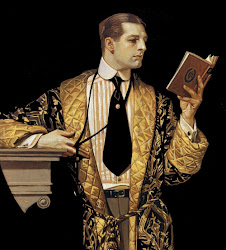 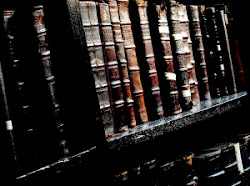 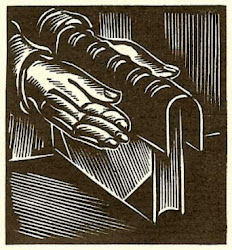